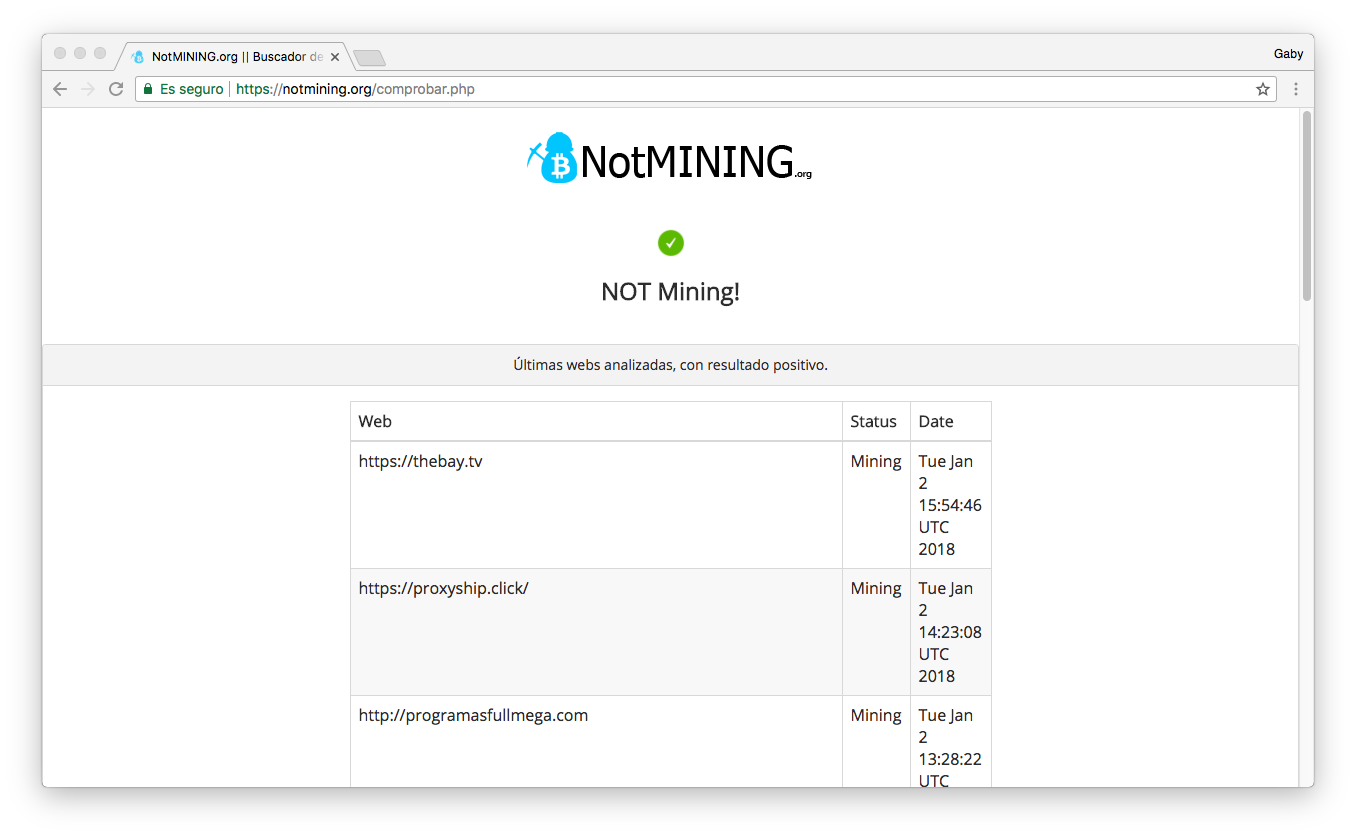 With the current boom of cryptocurrencies a new problem has arrived for all of us who surf the web: the unauthorized use of our resources to undermine digital currency. We have seen a huge amount of different threats and methods: be it web pages, malware, extensions, even public WiFi networks.

Several solutions have appeared in the meantime, extensions like NoCoinoffer a protective barrier, something that browsers like Opera are already implementing by default. But it is an initiative created by two Spaniards that seeks to address the problem in another way, offering its own search engine for websites that undermine cryptocurrencies : NotMining.

In addition to the web with the search engine, they have an extension for Chrome and an add-on for Firefox . The difference between something like NoCoin or the function of the Opera browser, is that NotMining searches directly the code in the analyzed web, without black domain lists, with which they affirm that the possibility that there is a false positive or a false negative is lower.

In Genbeta we contacted their creators to tell us about their project, they will explain better how NotMining works, what scripts they look for, what plans they have for the future and if they will create a database with the sites that they will detect with their search engine. .

The idea of ​​the web was, in fact, something that started almost as a class project. We wanted to investigate how these websites worked, the code they were using and automate the search for both patterns and code used. We do not focus on specific cryptocurrencies.

NotMining analyzes the sites where the most well-known scripts come from(or code copied directly on the web), patterns that start mining with basic configurations, such as the number of cores or the percentage dedicated to the script to be executed. hidden patterns between the code, etc.

With this method they seek to minimize the possible false negatives or false positives that could occur if they use blacklists, as some extensions already do. Explain something that might seem obvious, and is that keep these black lists up to date, with the amount of websites that exist is practically impossible .

A database under construction

“Once the URL is analyzed, in the case of the web, it gives a result that is saved in a database, if the web gives a negative result, we analyze it directly ourselves in case a new code has appeared that we had not contemplated beforehand “.

“In the case of the extension is not, because privacy is most important to us, which we updated the code you need to analyze the data that brings us our website. Latest websites analyzed, have been positive, are exposed on the home page of our website .

The idea is to make, in a short time, a public database where you can directly see the results of all the websites analyzed.

As a user you only have to enter a URL in the search engine to check if a website is going to try to take advantage of your CPU to mine cryptocurrencies. Or, you can install the extensions and be alerted immediately if NotMining detects a threat of this type.