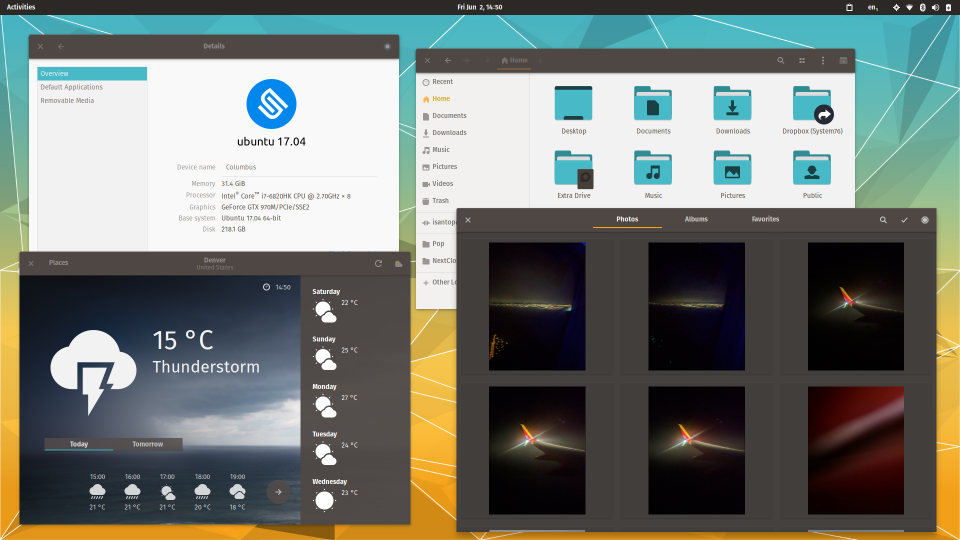 System76 is a manufacturer of desktop computers and laptops that has some years in the market. Based in Denver, Colorado in the United States, they have been selling machines with Linux pre-installed for more than a decade.

Their first computers had Ubuntu 5.10, and today they continue to use Ubuntu as the preferred operating system for their products. Well that is about to change, slightly. System76 is working on its own distribution called: Pop! OS.

Another distro more based on Ubuntu … but

Pop! _OS is a new distribution created by the company and will be based on … Ubuntu. At first glance it looks like a simple fork of Ubuntu 17.04 with GNOME that has its own GTK theme and icons. Which by the way, both are pretty and flashy.

However, the company has emphasized an interesting detail about the public its system is oriented to …

We are not building an alternative to Windows and Mac, or an operating system for mainstream users. We are developing Pop! _OS for those jobs in which Linux excels and this coincides with the System76 client base.

This new distro is designed especially for those who use their computer to create. Whether it’s professional software products, 3D models, computer science, engineering, artificial intelligence, the internet of things, and other cutting-edge technologies.

It’s another kind of audience, it’s not the same kind of creators as those who seek to please the Creators Update of Windows 10 for example. Apparently the customer market of the company that obviously uses Linux, uses it for quite specific things.

If you are a hardware manufacturer and you have more control over the software with which you ship your products, this can only be good news for you and your customers. Those who have a team of that brand will receive in theory an optimized system for the hardware that they bought and for their needs.

Maybe System76 got tired of waiting for Canonical and the slow and rugged development of Ubuntu in recent years, especially with the death of convergence, goodbye to Unity and the return to GNOME.

And for the rest of the community?

It is another classic case of the good and the bad of Linux. On the one hand perhaps some say “uff what annoying, another distro based on Ubuntu”. And, on the other hand, there is the essential feature of open source, and that is that anyone can do what they want with it.

This Pop! _OS may be optimized for System76 equipment, but obviously it is an open project, that anyone can install on their computer and try to see what they think and if it turns out to be the new love of their life.

Hence the stable release in October is not much time, but in the meantime you can follow the development on GitHub or download the ISO alpha version so directly (super slow servers), or via torrent.

If you are not interested in the whole distro as such, but you think it has an interesting and beautiful appearance. The GTK theme and icons are available to install in other distributions through the official repository.