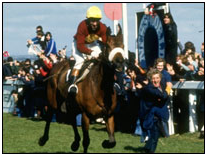 Ask any one over the age of 40 to name a famous horse and they will pretty much all say Red Rum. And rightly so. Red Rum is the only horse to have one 3 Grand Nationals. The National is by far the most testing and dangerous race in the country yet his horse won it 3 times, and came second twice, in between his victories. Red Rum won in 1973 and 1974 he then came second in 1975 and 1976 winning again in 1977 before taking an early retirement. It should be remember that at the time the Grand National was not known for the enhanced welfare that it has for horse and rider now. It was, frankly, a massive test for horse and rider without parallel. He never fell in 100 races. Where did this mighty steed come from?

Red Rum was born in Kells in Ireland from good breeding stock, his Grandma being a winner of the Irish 2000 Guineas. To start with though the future 3-time winner’s racing origins were humble. He was used as sprint racer over short distances and showed early promise by ending up in a photo finish, neither horse could be separated, and the race was a dead heat. He ran consistently over the flat even being ridden by the famous Lester Piggott. 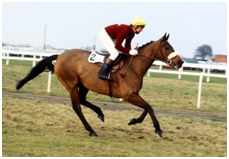 The horse then found itself passed from pillar to post with no real trainer or base to call its own. He was also suffering from a performance sapping illness to his hoof. However, the introduction of Ginger McCain, a car dealer by trade, helped the horse turn a corner. He tried taking the horse for gallops in the seawater at Southport the horses condition seemed to improve.

It may have seemed to a massive risk to take a flat racer and turn him into a jumps and hurdles horse but Red Rum repaid the risk to McCain three times. His first victory in 1973 is considered to be the finest comebacks ever seen in the Grand National. Red Rum was 30 (horse) lengths behind the leader, Crisp, who had pretty much led all the way. He was still 15 lengths ahead as they cleared the final jump. However, there is a long race to the finish line after that and right at the very end Red Rum just beat Crisp by three-quarters of a length. Red Rum won it again the next year, even carrying extra weight to make it fairer on the other horses. He came second in 1975 and 1976 but in what is considered one of the greatest moment sin sporting history he won his third and final Grand National in 1977.

That was not the end for Red Rum. He did not slip away and he was never forgotten by his adoring public who he had thrilled with his performances. He became a celebrity opening supermarkets, had a range of merchandising and even turned on the Blackpool illuminations. His passing at the age of 30 provoked headline news. He is, fittingly, buried at the winning post at Aintree.

There are many ways in which both the trainers and staff ensured that Red Rum was the healthiest he could possibly be. If you are looking for ideas on how to do the same the following article may help you https://www.yourhorse.co.uk/advice/horse-care/articles/5-changes-you-can-make-to-keep-your-horse-healthy . If your horse is in the unfortunate position of developing sweet itch there are a variety of companies that offer products that can help relieve the symptoms. Take a look at https://www.stinky-stuff.co.uk/sweet-itch/ for some ideas.