The modern trousers that we have today were not as they once were. Trousers start from the ancient civilizations of the Middle East and Asia so that men, and women, were not uncomfortable when they rode on horseback. They were standard military dress and were the undergarments for Knights on horseback. As the centuries rolled by they became very flamboyant fashion statements for dandies and the upper classes. By the Nineteenth and Twentieth century this style had calmed down and been transformed into something that you would recognise. Who sets this trend towards the more dignified and sedate trouser? If you need some new ones Calvin Klein Menswear has some great examples at EJ Menswear.

The main trailblazer of the modern trouser was Edward the Seventh. As Queen Victoria’s eldest son, he set the standard for trousers as we know them today. He was also the figure who introduced creases of trousers into the mainstream. He was, on the whole, a bit of good for nothing and had to wait some 60 years before he got to be King whilst his Mum went for the reigning record. He spent the time declaring things open and unveiling plaques when his Mother couldn’t be bothered to go. 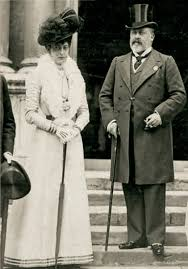 He was a bit of a playboy, which his Mum severely disapproved of but he was past caring about. He only got to be King for 9 years, the lavish lifestyle finally catching up with him, but he did manage to modernise the Army so that it wasn’t completely unprepared for World War one and he made us great friends with France and Europe. Unfortunately, that didn’t include Germany.