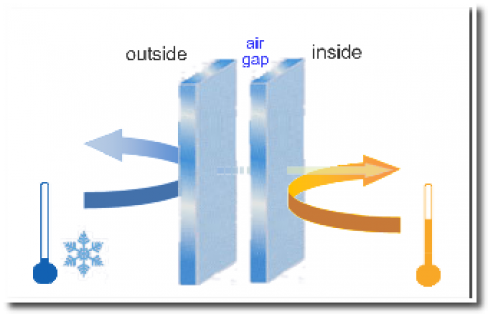 Sitting in your home looking out of your Aluminium Bifold Doors into your beautiful garden,  you may find yourself looking out at the wonderful scenery and wondering about how the double-glazing works in these large beautiful doors? Double glazing is standard in most properties nowadays and there is a very good reason for this.

It’s pretty easy to understand and you won’t need to be boggled by science. The basic premise behind what makes double glazing so effective is that air is worse at conducting heat than glass. Air trapped between two layers of glass panes doesn’t conduct heat all that well, so less heat will escape through two panes than a single pane of glass in the cold winter months.

When an object warms up, the molecules are moving. Molecules move faster in a warm object than they do in a cold one. With all the molecules bustling around, bumping into each other, they make each other move faster which results in more heat being generated. Where a substance has molecules that are packed closely together, such as glass, heat spreads quickly as it’s easier for the molecules to hit each other. If you think about how far apart the molecules are in air, it’s easy to see that heat would spread much more slowly.

Double-glazing is a bit like wearing a jumper. The fibres of a jumper trap air between them. When the fast, warm molecules from your body knock into the cooler air molecules, the heat gets transferred to the air trapped in your jumper – keeping you nice and toasty! The same principle applies to double-glazing. The trapped air between the panes acts as an insulator between your warm interior and the cold outside air.

Double glazed windows aren’t just filled with any old air but can be filled with argon, an inert gas. It’s necessary to use an inert gas which doesn’t easily react with other substances. The small advantage that argon has over plain air is that it’s even worse at conducting heat, about 33% less effective. It doesn’t really matter whether your windows have air or argon, the principle of insulation remains the same.

Believe it or not, the size of the space between panes determines how effective the windows are. Too close and more heat transfers from one side to the other. Too far apart and the difference in temperature between outside and inside could cause the panes to move. Either scenario sees the efficiency of the windows significantly reduced. Most windows are at their most efficient in terms of insulation when the panes are placed apart by 16 to 19 millimetres.

Of course, just glass alone is of no use at all. The choice of frames for your windows also affects their insulating capabilities. Most frames in the UK are constructed from wood, aluminium or uPVC. UPVC is an ‘unplasticized polyvinyl chloride which was invented during the first part of the 20th century. It’s a very popular material choice because it offers flexibility, firmness, high durability and easy maintenance.